To produce such a map we presented an eight-bar stimulus, which consists of a flickering bar measuring 1/5 of the screens width and moving across the visual field in eight directions. In order to evaluate data, a recently proposed method for “population receptive field (pRF) mapping” (Dumoulin et. al., 2008) was used. The BOLD response of each voxel was predicted using a two-dimensional Gaussian pRF model. The ideal pRF parameters, i.e. center location and spread, for each voxel then were then identified by minimizing the residual sum of squares between the predicted and observed fMRI time series.

In order to obtain high resolution functional data a multiband EPI sequence is used, which employs simultaneous excitation of several slices to enable higher resolution when compared to conventional sequences.

The pRF analysis shows that the occipital pole corresponds to visual stimuli presented at the center of the visual field, while anterior regions correspond to stimulation of more peripheral regions. The phase angle overlay shows abrupt changes of the angle value i.e. reversals of the polar angle representation. This regions can be understood as boundaries, which can be used to classify different regions of the visual cortex. The images were thresholded with a coherence threshold of 0.2 to make sure that the voxels had adequate coherence with the fitted pRF model.

This figure shows results of simulated central and peripheral vision loss. By analyzing the data in the same way we did when using a full stimulus, we confirmed the relations of the voxels located in V1 and positions in the visual field and showed that it is possible to localize visual field impairments using this method.

To further improve the quality of retinotopic mapping custom surface coils can be used. The Figure bellow displays such a custom 7 channel surface coil built in our lab. These coils allow for a higher SNR when compared to regular head coils and can also be used to increase the spatial resolution of occipital lobe imaging considerably. This is achieved by only imaging the part of the brain, the surface coil rests on, i.e. narrowing the field of view. 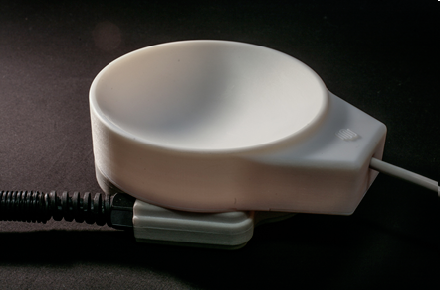 Accurate pRF mapping could be of particular importance for gaining a better understanding for diseases which result in localized loss of vision in the future. Examples are age-related macular degeneration (AMD), retinitis pigemtosa (RP) and glaucoma.